Newmedia projects will host “Archives 1993-1999/ Iran” part of Ghazel’s earlier and less shown video works on Feb 15 -17, 2019. These videos are the pioneer works in the Iranian video art scene: a collaboration of Ghazel with Kaveh Golestan at the Golestan Gallery; a video/ performance show at Gallery 13 (with Roxana Shapour); along with a series of installations that took place in Ghazel’s family orchard in the countryside. This archival show will end on Sunday, with an artist talk with Ghazel, and a discussion with Omid Ghajarian and Pouria Jahanshad.

Ghazel was born in 1966 in Tehran.
She received her B.F.A. and M.F.A. from L’Ecole Supérieure des Beaux-Arts in Nîmes (France). She also received a B.A. in Film Studies from Paul Valéry University in Montpellier.. She has participated in many international biennials, including the 50th International Exhibition Venice Biennial (Clandestini) in 2003, the 8th Havana Biennial (El Arte con la Vida) in 2003, the 3rd Tirana Biennial (Sweet Taboos, Episode 2: To lose without being a Loser) in 2005, the 15th Biennale of Sydney (Zones of Contact) in 2006, and the 7th Sharjah Biennial (Belonging) in 2005. Her works are in many public collections including Musée national d’art moderne, Centre Pompidou (Paris), MUMOK Museum Moderner Kunst Stiftung Ludwig (Vienna), the Musée national de l’histoire de l’immigration (Paris), the Aïshti Foundation (Beirut), and the Bic Collection (Paris). Her WANTED posters are shown permanently in Musée national de l’histoire de l’immigration (Paris). Her recent solo shows are “Black Hole” (2019/Azad Gallery, Tehran), Dyslexia” (2018/ Hinterland Gallery, Vienna), and “Mismappings” (2017/ ISCP Gallery, New York). In April 2019 she will be in the 13th Havana Biennial.

Ghazel’s work deals with social issues, roots, contemporary migrations, hybrid identities, belonging, and the effects of War.  She lived some 30 years outside of Iran but now divides her time between Tehran and Paris. 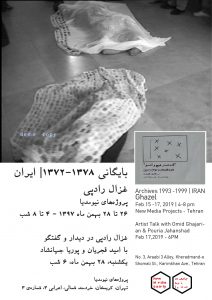