“Aperture” Trilogy & “The Archive of Tooti”

From July 1 to 4, 2022 (Friday to Monday), Room for Doubt will host an exhibition by Jaleh Nesari, “Aperture trilogy, and The Archive of Tooti.” This exhibition reviews her video works from previous years, along with the installation of The Archive of Tooti, which was previously shown at the Eighth edition of the Limited Access Festival.

Before the Revolution of 1979, the prominent and money-making part of Iranian cinema included films produced under the influence of Bollywood Romantic Movies. These films were the story of poor people who overcame all their misfortunes with the power of love. In addition to the happy ending of the story of the poor lovers, The main reason for the high sales of these films was the scenes of women dancing and singing and revealing their open relationships with men. Iranian society, which still had traditional and religious origins, considered these films to be the cause of the destruction of its long-standing values ​​and did not accept them as appropriate for the family to watch. So most of the audience of these films were men. These films immersed them in their heroic and sensual fantasies and made them forget their misfortunes for a few hours. Still, these women were considered the cause of society’s corruption outside the cinema. The intellectuals of the society also did not have a favorable opinion of these films. They considered these films to have no artistic value. They expressed regret for the audience of these films and their desire to see women. Dr. Houshang Kavousi, one of the founders of film criticism in Iran, coined the term “Film Farsi” for these films, which is still used and is synonymous with vulgar film.

Jaleh Nesari holds a bachelor’s degree in dramatic literature and a master’s degree in cinema from Tehran University of Art. Since graduation, she has taught in art conservatories, educational institutes, and universities. Her works expand via various mediums such as literature, theater, and cinema. Currently, Jaleh Nesari’s primary focus is on video and experimental film and sound. Her works have been shown in various video programs such as “Moving Dust” (in different cities across Iran, Istanbul, and Vienna), “Detour to Tehran” (Vienna and Munich), “Fragile Frontiers” exhibition (Yarat art center in Baku), “Arbitrary Lines” exhibition (Hinterland galerie, Vienna and Aaran Projects, Tehran.)

About Room for Doubt:

“Room for Doubt” is a temporary, mobile, artist-run initiative that has taken up residence in the former location of New Media Projects to pass its transient phase. 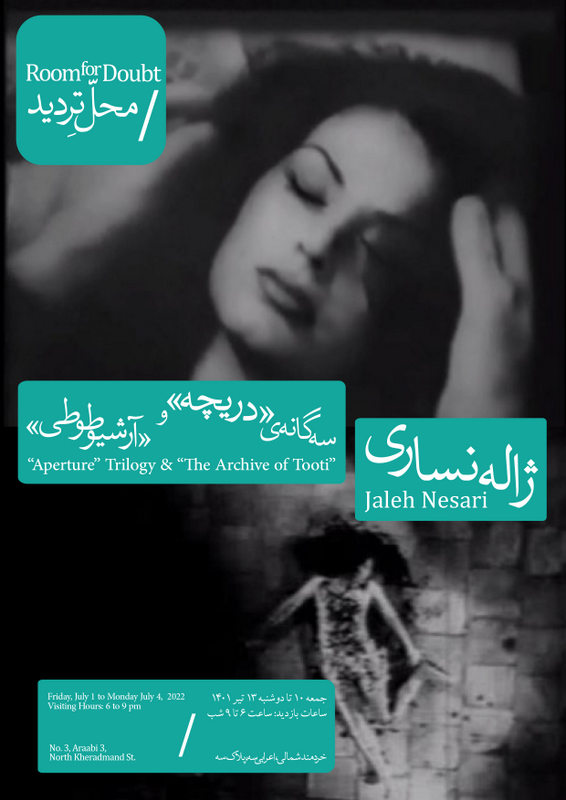 About the Archive of Tooti

The prominent and money-making part of Iran’s pre-revolutionary cinema included films centered on women’s dancing and singing scenes. With the occurrence of the 1979 revolution, most of the women who played roles in these films were withdrawn from the cinema and could no longer appear on the screen.

The archive shows the path of fame to the decline and death of one of these women by using everything published about this woman in the media, including older media such as newspapers and magazines in the years before the revolution and newer online platforms such as YouTube, Facebook, and Instagram.

With the publication of news about Touti’s homelessness in the early 2010s, her name appears in the media after several decades. This time, her bitter days are being shared on social networks as “interesting” and “popular” news, and people are republishing photos and old magazine articles about “Tooti.” A large part of this archive was created using content shared online. An image that the artist took last year in Behesht Zahra cemetery of the tombstone of “Tooti Salimi” was added to this already existing collection.

The “Home Cinema” video shows the years of silence, isolation, and nothingness by putting together shots of the movies in which these women have acted. Doing so displays an everyday life merged with the muted presence of the past.

Before the 1979 revolution, most Iranian movies included female dancers, singers, and romantic affairs. The production of such films was banned in the post-revolution era, and most of the actors in these films were removed from the cinema industry. Fleur Cinema is an old cinema in the south of Tehran, famous for showing such movies. After the revolution, Cinema Fleur became weaker and weaker and was closed forever in 1984.

“Venus” cinema, which was later renamed “Sarah” cinema, is a cinema at “Lalezar” street, which experienced the fate of “Fleur” cinema in the late 2000s. The video “Cinema Venus” was made by combining shots of old movies. The editing is influenced by “Ballet Mécanique (1923–24)” by Fernand Léger.